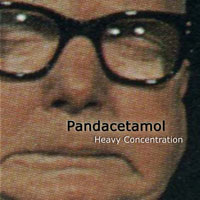 Pandacetamol are Paul Alexander and Mark Rushbury. They love playing their cheap vintage synths and sound boxes, and generally make dark, beautiful and strange noises in the process. Sometimes they like to share these noises. Sharing is good.

Previous noise-sharing exploits have included the Pandacetamol album of opulence, unease and funky fractured beats entitled "Heavy Concentration" which was unleashed to the public in early 2008 through the wonderful experimental ambient label Earth Monkey Productions. In late 2007, the German label propulsion285 released a Pandacetamol mini-album excursion through the heady world of early 90’s acid entitled “Tabulations”.

The third release for Earth Monkey is Nocturnal - another great collection of amazing analog acid adventures. Nocturnal is a bit darker than past releases but has all the trade marks of a quality Pandacetamol release

Two minds intermingled & enmeshed in conceptual sound that carries my soul in the air without body in a new freedom from earthly gravity and a new dimension of an all encompassing floating sound produced in the spirit of universal freedom for all to share. Escher found such dimensions.
Moog invented for people like these.....